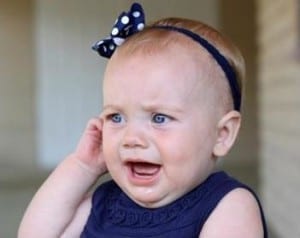 When your little one is in pain with a recurring ear infection, your natural instinct is to find the quickest solution that seems to be effective.One option the medical profession offers is to have grommets inserted in your child’s ears. Grommets are little PVC rings, or tubes, inserted into the eardrum to allow the pressure to decrease in the middle ear, air to enter, and the fluid to drain out. Sounds sensible, and as a bonus you are told you won’t need to worry about developmental challenges from the temporary deafness that some believe ear infections can cause.

Before you book your child in for what is now the most common surgery for children, let’s take a bigger view.

First, grommets do not heal ear infections. Period. Yes, they may alleviate the pressure/pain your child is experiencing, and allow the ear to drain and temporarily assist hearing. But they certainly do not address the cause of the problem. Anecdotal reports from parents have been that sometimes their child experiences even more infections after the grommets are inserted. We had a child visit our practice whose parents had opted for grommets to be implanted in his ear. The result? When his grommets fell out he was left with a hole in his ear drum, which expanded due to infection. The tear led to scarring and eventually the child was given a skin graft to heal the ear drum. Some reports state that this child’s predicament is in the ‘1%’ but try telling that to his parents.

One wide-ranging study* tracked 6,000 children from when they were early infants until around nine months. Each child was regularly checked by a medical doctor:  those who had fluid on their ear were given grommets at three or four-and-a-half months, or later (if they still had glue ear) at six or nine months. Assigning which child to each time frame for the grommet surgery and insertion was done on an ad hoc basis, with the aim being to understand whether doctors should cut and insert grommets as early as possible in a child’s development, or whether it didn’t affect the child if grommets were delayed.

At six years of age each child underwent tests for IQ, speech, language and behaviour. No difference was found between the children who had been assigned to grommets at an early age and those who were given grommets at six or nine months of age. Therefore, the argument about ear infections causing developmental delays isn’t a strong one.

I teach consistently about the 3Ts: thoughts, trauma and toxins. Each of these affects our nerve system and how we function. The birthing process can provide a physical trauma to the cranium, even when the parents have chosen the most natural, gentle birthing process possible.

Let me explain this a little further …

A breech birth inherently has cranial molding challenges because of the feet/bum first rather than the head first birth process. Forceps and vacuum extraction births also create similar cranial challenges as does a ‘C’ section because of their forceful tugging on the head. Even beautiful vaginal home births —like our two boys —create cranial challenges by virtue of the physical process. This was one of the reasons why we wanted to make sure our children were adjusted from birth. The process itself has such an impact on the cranium and the spinal column. The cranium and the spinal column are home to the brain and spinal cord forming the central nerve system — a vital structure which reflects our expression of health and function and changes here, within the neurological communication, contributes to health challenges. Our youngest was a breech birth at home and out of all three of our children she is the one to create ear challenges. I adjust her during this time and tuck her into bed with me.Hugging her,I begin to ask her questions about her ear. She tells me where to hold onto her ear and in which direction to pull — slowly but surely shifting her temporal bone in the direction that best serves her. I stop when I hear ‘just there Mummy’ and she quietly drifts off to sleep.Chiropractic adjustments assist an infant and child’s body in developing to its full potential.

Chiropractic adjustments are not, in themselves, a quick fix for ear infections. However, when we have provided chiropractic care to children experiencing ear infections, we have observed a sense of ease over the following days as the child’s nerve system is freed to communicate clearly and the body’s natural repair process swings into action.Over ten to fourteen days, the time of natural immunity to be ‘built,’ we’ve seen the infection reside.

Breastfeeding specifically assists the development of the ear canal in that, when a child is born, the Eustachian tubes are almost level. This is all part of the normal development of your child’s system, and one reason why it is more common for young children to have blocked ears than for older children.Breastfeeding assists in the tubes draining, firstly by the angle at which we cradle our child — swapping sides as well — and secondly by the suckling motion which ‘pumps’ the cranium and works the tubes of the ear canal. Toxins play their part, particularly if mothers are not educated about formula feeding as compared with the benefits of breastfeeding. There are ‘ingredients’ in formula that a baby may not be ready to receive. As such a child may develop more mucus than normal.

Keeping the mucus producing foods at bay (processed foods, dairy etc) and the ‘good’ foods higher means they are less likely to ‘build up’ phlegm which can contribute to congestion. The right diet at all ages is part of a strong foundation for an optimum expression of health.If you do choose to bottle feed your child, at least ensure you feed your child in a manner similar to breastfeeding and remember to change sides! Parents tend to hold or lay their child on their back instead of on their side when feeding with a bottle. This ‘on the back feeding’ can contribute to changes in the cranium as the occipital bone (back of head bone) flattens and as a result the other connected bones of the skull move to accommodate the change. The temporal bone which houses the ear apparatus is one of those cranial bones affected by ‘on the back’ feeding.

Another aspect of toxins I want to address is the use of antibiotics to ‘treat’ ear infections. Antibiotics simply shut down the immune system, leaving your child’s body unable to become stronger from the current infection or grow from the health challenge. And a compromised immune system underlies chronic infections.

Thoughts are another aspect to consider. When a child with an ear infection visits our practice, I make a point of asking about the family unit. It’s often I discover that a new brother or sister has been born, and the child may be adjusting to hearing that their position in the family has altered. What is it that your child might not want to be hearing?

When our body overcomes an expression of ‘dis-ease’ naturally, it has built strength and immunity for the future. I have regularly observed this in my own children: after an increased temperature or some other health expression, they tend to go out and master a new skill, experience a growth spurt, indeed they change in some way that will be of service to them at that point in time. Part of the learning for a parent is to cope with seeing your child experience discomfort, and not feel compelled to rush out and find whatever the quickest ‘fix’ is. That will simply mask the symptoms, squashes their immunity and create an opportunity for a re-occurrence eventually rendering the cycle chronic. The most valuable lesson I’ve learnt is to understand that the body that made itself has the power to heal itself.